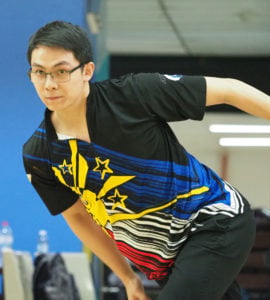 April 2018, DAGUPAN CITY – RP Team member Kenneth Chua  once again proved that he’s operating on a different level in the recently held 16th DATBI-CSI NBT Invitational Open. In the battle for the Open Masters Title, the Asian Indoor Games silver medalist managed to post five consecutive 219+ scores, beating every single bowler that he was matched with. 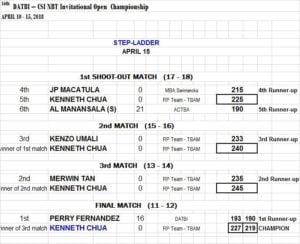 Placing fifth with a 10-game series of 2208, Chua of TBAM clenching the gold seemed like a long shot, for the lanes that day favored DATBI’s very own Perry Fernandez.

Tan, Kenzo Umali, also RP Team-TBAM, JP Macatula of MBA-Sarimanoks, who placed 2nd, 3rd and 4th respectively, all put up a good fight against Chua. But the latter’s consistency and experience kept him winning by a mark or less in the games leading to the title match: Against Macatula, who scored 254 in his last game, Chua won 225-215. Against Umali, Chua put up a narrow victory of 240-233; and followed this up with a 245 against Tan’s 235.

Chua confesses that he had his struggles. In his 10th game, for instance, he missed a couple of spares, but he put that all behind when the stepladder began. He explains, “My game plan was to be more focused and to maximize every frame. I think this kind of positive mindset helped me a lot, which resulted to better scores during the stepladder finals.”

This fierce focus and no-negativity brought about a winning streak that not even the top player Fernandez could end. Despite having a handicap of 16 and two chances of winning the title, the DATBI bowler was beaten by Chua, 193-227 and 190-219.

Asked how he handles open masters tournaments that include players with a handicap advantage, the new DATBI-CSI NBT Invitational Open Masters Champion shares that just doesn’t pay too much attention to these details.  What he focuses on is the goals he sets for himself before each tournament. For this particular competition, he notes, “My target was to score 200+ for the 10 games to make it to the top 6. Fortunately, my game plan worked and I was able to make the cut. I didn’t think too much about the scores and the handicaps. I just played my game and gave my best shot every frame. This kind of mindset helped me a lot to perform well and to lessen the pressure during the finals.”

Having earned his first international title and being the runner-up in the Asian Indoor Games last year, Chua aims to have an even more successful and competitive 2018. He particularly is aiming to defend his title in Philippine International Open and to take gold in the much-awaited win gold Asian Games (Indonesia) and the World Men’s Championships (Hong Kong).

“I would like to thank my parents for accompanying me and supporting me all the way through my practices and tournaments; Coaches Paeng, Biboy and Coach Jojo for their support, patience and guidance about which [areas] I need to work on more, particularly on my mental game and some techniques on physical game.”

Always aiming to be a better bowler, Chua shares, “I am currently working hard on developing a smoother arm swing to be able to make consistent and decent shots every frame. I am also trying out some techniques that would develop my versatility as this would be a major requirement for today’s level of game play. To be able to adapt and adjust quickly during slick lane breakdowns is also one of things I’ve been working out.”

He adds, “I will always dedicate what I’m doing to my former beloved Coach Madoka, who passed away last year, I thank him for all the techniques that he shared with me, which had brought me where I am today.”

Chua also bowled 300 during the qualifying; he now has 29 perfect games in total.

Incompetence in the first degree