STA. LUCIA, RIZAL – True to their ongoing tradition of gathering and playing their favorite sport before each year comes to a close, OFW and balikbayan bowlers from different continents enthusiastically reunited and competed in the 2017 Worldwide Balikbayan Bowling Tournament. Held at the Sta. Lucia East Bowling Center last December 27 to 28, this edition of the tournament saw 110 participants and lady bowler Felinda Grzybowska from Malaysia emerge as the champion. 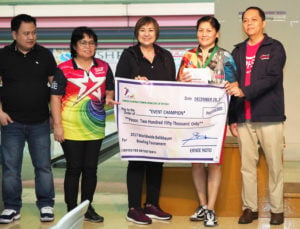 Grzybowska, in the qualifying round of 3 squads, initially placed fourth with a 4-game series of 869. She averaged 202.25 but was able to surpass other bowlers due to her handicap of 15. This 15-pin advantage of hers proved to be very useful in this male-dominated playing field of very talented bowlers.

JM Villanueva missed out in the finals by just 9 pins.

In the shootout, Santos from USA seemed to have the gold in the bag. He beat Manoso (Philippines/UAE) and Ragasa (Italy) in the first round and moved on to compete against Gomez (Qatar). Santos emerged victorious again in the second round, but his winning streak was ended by the only female bowler in the top 5. 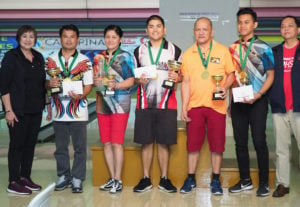 Sponsored by Cash Pinas, Sky Freight, Chinabank, Phil Overseas Labor Office, Riyadh and The Bowler of Bong Coo, the 2017 Worldwide Balikbayan Bowling Tournament had the most number of participants since the tournament was established 20 years ago by Filipino tenpin bowlers from Saudi Arabia. Hosted by the Unified Filipino Tenpin Bowlers of Riyadh, this tournament’s prizes amounted to PhP 500,000.

ADVERTISEMENT
Don't miss out on the latest news and information.