236: The Score that Started It All for Bowling World Cup Champion Krizziah Lyn Tabora

There are victories and then there those victories with a capital letter V or the ones that offer audiences a good show! Filipino bowler Krizziah Lyn Tabora, in her quest to bag the Bowling World Cup title in Hermosillo, Mexico last weekend, gave us the latter. Not only did she crush title holders from other countries, Tabora ended the country’s 14-year title drought and reminded the world that the Philippines still produces superb bowlers.

That she’s difficult to read may have been what the commentators at the 53rd QubicaAMF Bowling World Cup (BWC) had to say about Filipino bowler Krizziah Lyn Tabora. But there was no denying that behind her expressionless face was an inextinguishable fire focused on bagging the title.

When Tabora was fighting for a place at the semi-finals (top 4), she had the most match wins – six out of eight. This, partnered with a 237.75 average, allowed her to join Jenny Wegner of Sweden, Rocio Restrepo of Colombia and Siti Safiyah Amirah Abdul Rahman of Malaysia to proceed to the next round. But before doing so, it seemed that the Filipina made a vow not to be beaten again by bowlers Restrepo and Siti. 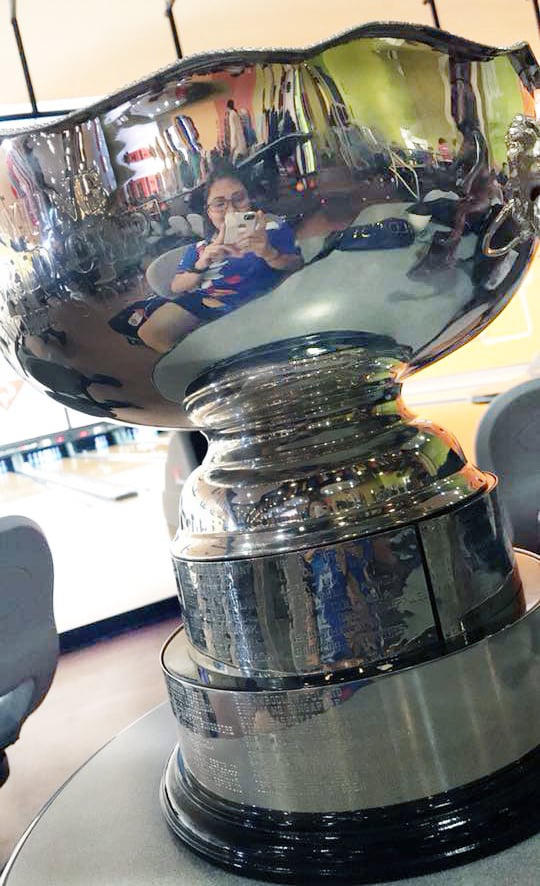 Self Portrait with the World Cup

In her semi-final match with the Colombian, Tabora bowled a string of 6 strikes from the 3rd to the 8th frame which resulted to impressive clean game of 249 against Restrepo’s good yet not enough to win score of 222.

And, during the title match, our subject answered her 10-pin miss on the 4th frame with a five bagger, which caused her to defeat Malaysia’s Siti by a landslide 236-191.

While Tabora’s path to victory seemed to only really actualize during the latter days of 53rd QubicaAMF BWC tournament (Sweden’s Wegner was expected to win for she had been topping the women’s list during the qualifying rounds), her journey to success began when she was just 13 – back when she bowled only with house shoes and a house ball. 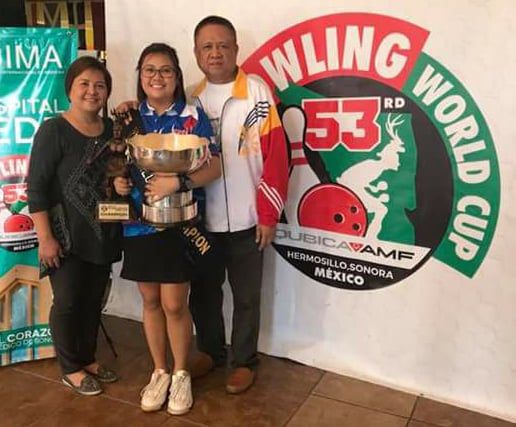 Krizziah with Parents Thelma and Junky

Tabora, however, was determined to prove that she also deserved lessons. She would roll the house ball on the floor until her dad finally gave in and allowed her to play one game to see her potential. “One-on-one kami naglaro noon at nagscore ako ng 236!” she laughs as she looked back at her early days. “Kaya pinaturuan kaagad niya ako kay Art Oberio, then Mon Camba, then Bonnie Solis, and then, ayun kay Purvis na.”

And the rest is history! After learning more about the game, she competed in local tournaments, and soon found herself on international soil playing the sport she fell in love with.

Since 2007, Tabora has let her love for bowling and representing her country take control her life. Aside from not being able to join family gatherings in order to train, as a junior bowler, she prioritized her sport over her studies; and as a young professional, she put her work as the financial manager of their family business on hold in order to work on this year’s string of international tournaments: SEA Games, Asian Indoor Games, the BWC and the upcoming 2017 World Championships in Las Vegas.

“Napahaba ang leave ko, so naging driver nalang ako ng pamangkin ko every morning before training,” expresses Tabora. Her sacrifices paid off, however, for prior to bagging the BWC title, she won bronze and silver with the RP women’s team in the SEA Games and Asian Indoor Games respectively.

The BWC Title may have been Tabora’s long-term goal; but today, she considers it to only be the beginning not just for herself, but for her fellow-bowlers as well. “Sana maging malaking tulong to para makilala at bigyang importance ulit ang bowling sa Pilipinas,” she quips. “Gusto kong makatulong mabuhay ulit ang bowling sa atin and ma-encourage ulit ang mga tao maglaro kasi maraming nasasayang na talents.” 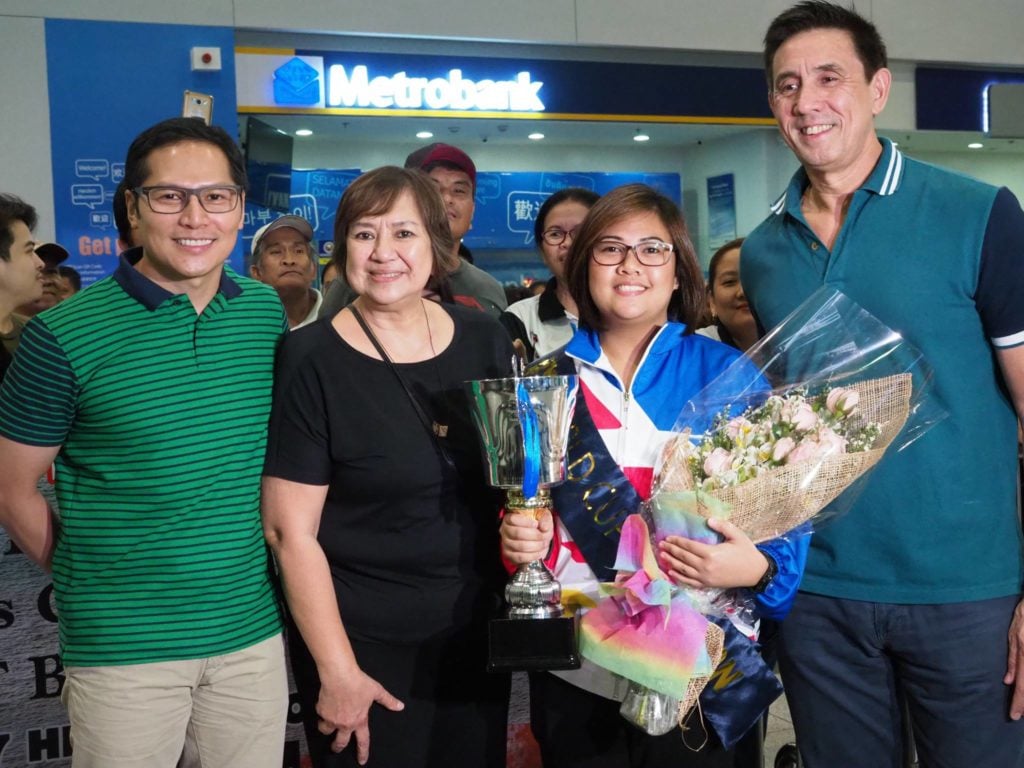 Paeng and Coo, as well as Lita Dela Rosa who won this prestigious tournament in 1978, bagged more world titles after their first Bowling World Cup wins and are now part of the World Bowling Hall of Fame in Arlington, Texas, USA. 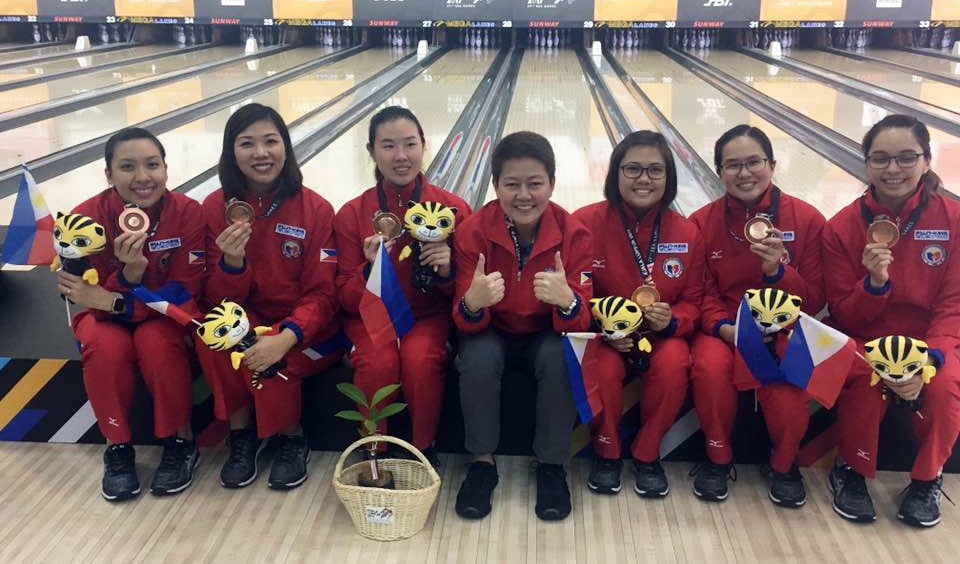 Krizziah with her team mates and Coach Jojo Canare

Tabora is the 5th Filipino to win the BWC title. CJ Suarez won the title 14 years ago in Tegucigalpa, Honduras. He, together with Jojo Canare, who now coaches the RP women’s team, also took home the Bent Petersen Trophy for Best Country Performance in 2003.