12 November 2017– The day proved to be made for the ladies, as Alexis Syof TBAM-Prima prevented four-time World Champion Rafael “Paeng” Nepomuceno from winning another local title in the Open Division Finals of the Magallanes Bowling Association (MBA) 45th Anniversary Open Championships, which took place hours after KrizziahTabora’s victory at the 53rd QubicaAMF Bowling World Cup. 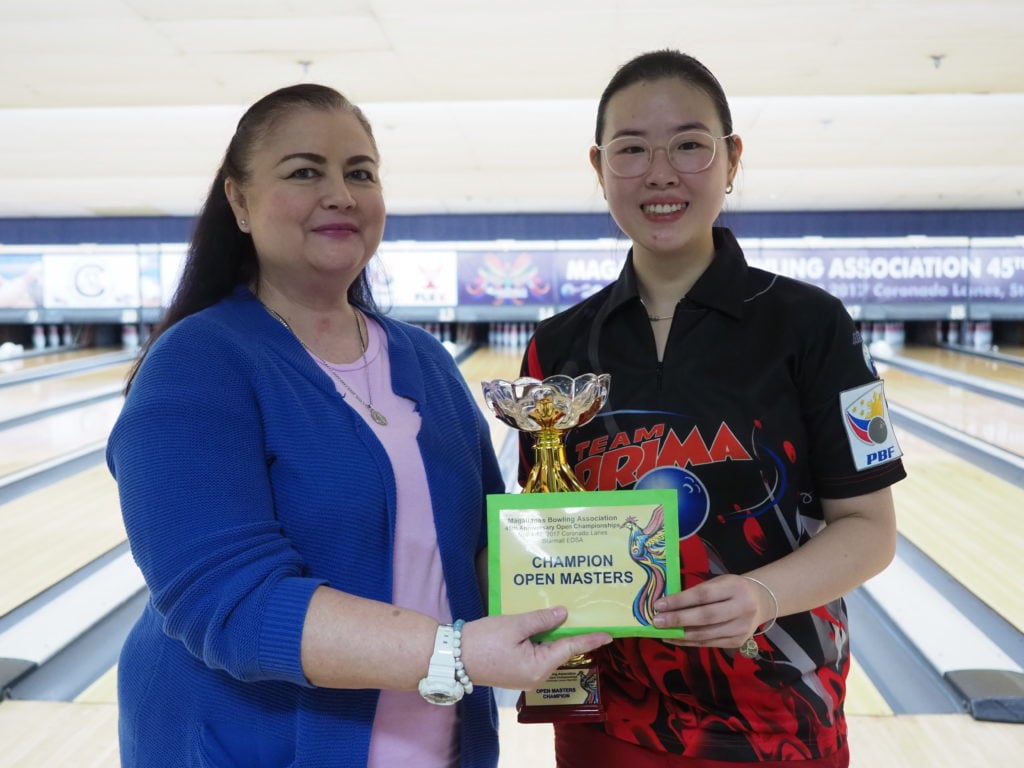 Held at the Coronado Lanes in Mandaluyong City, the battle for the open title was thrilling from beginning to end, for aside from the presence of the World Champion and RP team members, the starting list included Asian Games medallists RJ Bautista and Paulo Valdez, as well as other bowlers who have been performing well in previous open tournaments.

Sy, who won bronze and silver with her team in this year’s SEA Games and Asian Indoor Games, made sure to close all her frames in the title match, which resulted to scores of 212 and 216 –both were enough to beat Paeng’s efforts of 205 and 211.

“Winning the Open Title of the 45th MBA Open Championships means a lot to me because it’s my first open masters title,” notes Sy. “Since the World Championships in Vegas is near, it may be a good sign also, considering our recent World Champ KrizziahTabora won in Mexico.”

“It feels good to win this title because we had a close fight with Coach Paeng. At first, I was intimidated by the other players since the bowling stars were playing as well; but I did manage to just enjoy my game and not over think. I really do appreciate the people watching and supporting us. My younger sister & her friend were cheering for me and I’m glad that I’ve performed by best.”

The TBAM-Prima bowler, however, admits that Paeng contributed to her successful performance. When asked how she managed to stay calm in both games against the Hall of Famer, Sy reveals, “I applied the mental games our head coach have taught us: the pre-routine shots, visualization, and on how to handle pressure situations. (Nag-)enjoy lang din (ako) and (maintained) happy thoughts.”

For the 45th MBA Open Championships, which applied the oil pattern to be used in the 2017 World Bowling Championships (World Bowling Sport Pattern Bank 2 Tokyo 42′ on Kegel Flex with Fire), Sy qualified in 4th place with 1363, using her Storm Sure Lock and Hammer Black Widow Gold.

“Since I had a good reaction with these balls during qualifying, I stayed with the same game plan during the finals,” the newly-declared champion explains.

Only Merwin Tan, who topped the 8-game series in the Youth Masters Division, managed to take the title after beating runner-up RjoyDaval Santos in their second match 214-168.

Noelle Campos and Sammy Say Sy, who topped the Classified Masters and Mixed Senior Masters respectively, missed their chance to title after being beaten twice by Jolo Ramirez and Tony Teaño.

Aui Padawan from Cebu of Bowlingplex Tenpin Association (BTA) and Prima scored the only perfect 300 game in the tournament.

The 45th Anniversary Magallanes Bowling Association Open Championships is the last major tournament to be held locally prior to the 2017 World Championships in Las Vegas.

Magallanes Bowling Association is the third oldest bowling association in the Philippines with over 500 member bowlers worldwide.